What is a prenuptial agreement?

A prenuptial agreement is a contract made by a couple before they marry concerning the ownership of their respective assets in the event of divorce or death.

Are “rich” people the only ones who get a prenup?

No. As a matter of fact, the less money you have saved the more protective of that money may you want to be. 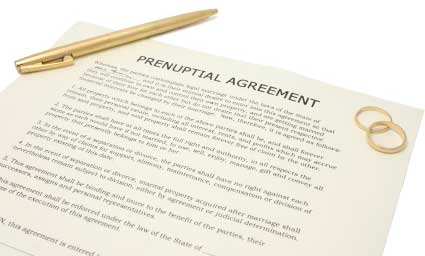 Under what circumstances should I get a prenup?

Consider a prenup if:

If I did not include some of my assets for the prenup is the prenup still valid?

If this is the case, the judge has the power to toss the contract.

When is the proper time to be presented with a prenup to sign?

You should be presented with the prenup well in advance before the wedding. Otherwise, there may appear to be coercion which is reason to determine the contract null and void.

What if my partner seems to be getting more out of the prenup than I am?

The state in which you reside will always look for equity to be make sure one person isn’t being taken advantage of.

What other kinds of agreements, aside from financial agreements, should we include in the prenup?

Prenups should include responsibilities that don’t have to do with money. However, try to avoid agreements that include, for example, that your spouse won’t gain weight throughout the course of your marriage. A judge may find this less serious or less important than deciding what religion your children will be a part of if you and your spouse believe in different religions.

Can I waive rights to child support payments in my prenup?

What is a sunset clause? Should I set one up?

A sunset clause specifies a time that the contract between you and your spouse would expire. After a certain number of years you may want to add more money to the amount in the original prenup.

Should the prenup be in writing?

Yes. Also, make sure the signing of the prenup is witnessed by a lawyer.

What are some benefits of having a prenup?