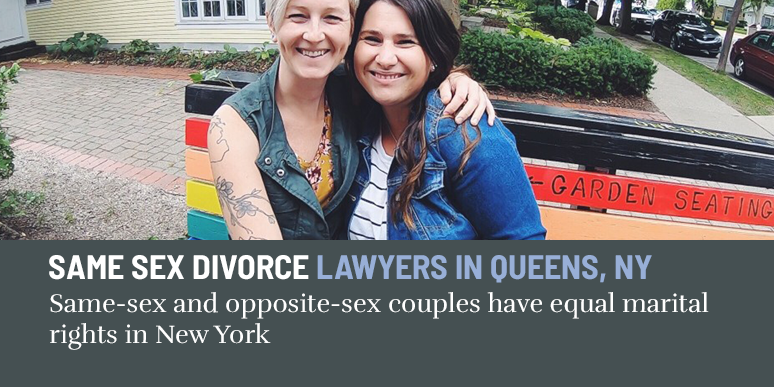 Same-sex and opposite-sex couples have equal marital rights in New York. These rights are established and protected partly due to the 2011 New York State Marriage Equality Act and the U.S. Supreme Court decision in Windsor v. Windsor (2013).

Therefore, if a same-sex couple decides to end their marriage, legal divorce and custody proceedings are necessary. A qualified same-sex divorce lawyer can assist with this process.

What Legal Rights do LGBT Couples have in New York?

How do Child Custody and Child Support Work with Same-Sex Divorce?

If one partner in a same-sex marriage carried and gave birth to a child, their spouse is considered to be the child’s second legal parent. This parent has full rights to custody and visitation unless determined to be unfit by the court. All legal parents may be responsible for providing or eligible to receive child support based on the court’s determination.

As with all marriages in New York, step-parents do not have automatic legal parental rights to their partner’s child, even if they operated in a parent’s role during day-to-day life.

What are My Visitation Rights with Same-Sex Divorce?

As with custody, family courts set visitation arrangements. The same is true for same-sex couples who adopted a couple together. Legal same-sex parents have the right to visitation with their children.

If you have been a primary caretaker for your stepchild but did not go through legal adoption proceedings, it is understandable that you may want to remain a presence in the child’s life. The experienced same-sex divorce and child custody lawyers at FK Law Group in Forest Hills can evaluate custody, support and visitation options with you.

Can I Get Spousal Support with Same-Sex Divorce?

The New York courts may award spousal support to same-sex couples during a divorce. In an uncontested same-sex divorce, both partners will agree to these terms. In a contested divorce, the Supreme Court of the State of New York will determine spousal support orders.

Work with an Experienced Same-Sex Divorce Lawyer in New York

New York’s complex legal system can make any divorce a confusing process. At FK Law Group, our team of experienced, compassionate divorce attorneys is skilled in handling same-sex divorce cases. Contact our Forest Hills office to discuss your options regarding spousal support, child custody, and division of assets in any contested or uncontested LGBT divorce.